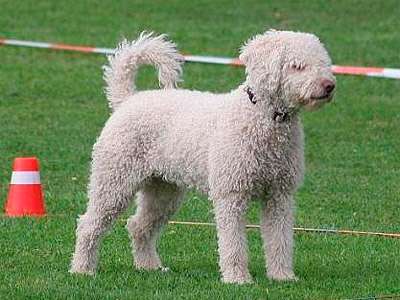 The Spanish Waterdog has existed in the Iberian Peninsula for hundreds of years. Primarily, it is used as hunting dog where it helps move goats and sheep to areas with pasture. Occasionally it is used by fishermen and hunters to retrieve game.

It is a medium-sized dog with a powerful athletic figure and keen expressive eyes. Most of them have docked tails to help prevent injuries while in the fields. Its coat is curly with woolly texture and comes in different colours. The most common is white and black although they may also be of other colours like beige and brown. An average male has a weight of 20kg and height of 19 inches while an average female is 17 inches high and weighs around 16kg.

They are highly energetic, hardworking and intelligent. They, therefore, have to be kept both mentally and physically active all the time. When socialized well at an early age, they can be very affectionate and loyal companions of their human family. They also bond well with children but their high energy activities may be too much for kids. It is recommended to always be around when they play with kids even if they were well-socialized when young. They are often uncomfortable and weary to strangers, but not shy.

They are also famed for their agility, attentiveness and natural guarding and herding instincts. They are, therefore, best suited to act as guardians at home.

Spanish Waterdogs have excellent reasoning skills and intelligence. These qualities make them easy to train. When training them avoid two things: harsh reprimands and sending of mixed signals. Harsh reprimands destroy their confidence and motivation to try out things. Positive reinforcement works best for them. Be firm but not harsh especially when discouraging behaviours you don't approve.

While still young, create as much time as possible for them to spend with children and adults. However, don't leave them with children alone. In addition, keep the puppies from energetic activities because at this stage their bones are usually not well-developed to handle such exercises and activities and can, therefore, easily get injured.

Lukewarm water should be used for bathing only when they are dirty. To dry them, avoid using hair dryer or excessively rubbing them with a towel. The cords should also be sheared at least once a year. Like all dogs, cut the nails any time they grow uncomfortably long. However, puppies should only have their nails cut after reaching 4 months. Apart from the nails, excessive hair in the ears should also be removed. Left to stay, this hair can become a source of many infections to the dog.

Given their high energy, they need a lot of physical exercises. They are at their happiest when performing intense exercises and play. It is, therefore, important that you schedule long daily walks for them. However, young puppies are not suited for such intense exercises. Before they reach one year, such exercises can cause them joint and bone problems.

Even though they look strong and powerful, Spanish Waterdogs are often prone to many health problems. Among them are allergies, cataracts, Addison's disease and hip dysplasia. Some of these diseases like hip dysplasia are transmitted from parents. It is, therefore, important that you be very careful when choosing them to avoid getting those whose parents had hip dysplasia. In addition, have the dog tested for cataracts, hip dysplasia and other health conditions to enable you take early corrective measures.

Spanish waterdogs also often have hairy ear canals. If not removed while still small, these hairs can be a source of many ear infections.