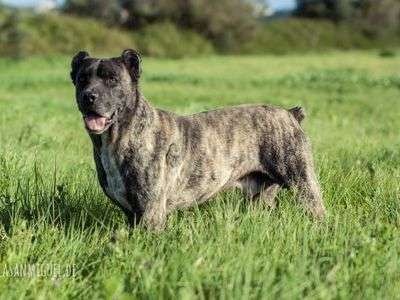 The Saint Michael Cattle dog is a mid-sized working dog, generally considered to be family friendly, intelligent and affectionate animals. The breed is originally from Portugal where the breed has been in existence since the early 1800s, the breed standard was published in the dog's area of origin in 1984 and was recognised internationally when it was accepted by the Fédération Cynalogique International (FCI) in 1995. Although described as a cattle dog, the breed is actually part of the Mollosoid family.

As it was originally used as a cattle herding dog, the breed displays natural herding instincts, and can be used for such. It is primarily bought as a companion dog, but due to their history they excel as guard or watch dogs. The breed also displays an aptitude for agility and tracking.

As the breed is a mid-sized working dog, it will need regular exercise and stimulation. They exhibit a very loving nature, desire lots of physical contact and enjoy being near their owners. Their high level of intelligence and docile nature means that with proper training and socialisation they can become a very loving and obedient family pet.
The need for proper socialising with other dogs and people, especially children, stems from the breed's propensity to be very wary of strangers. Once they get to know others, they are very friendly.


Origins of the breed

After the Azorean Islands were discovered in 1427, cattle were introduced to the islands. By 1493, there were abundant herds of wild cattle whish ranged out of control. This highlighted the need for a cattle dog to enable the inhabitants to properly herd the animals and bring them under control.
The first dog used was the fila de Terceira which is now extinct. This was subsequently bred with other molossoids to make the Cão de Fila de São Miguel (Saint Michael Cattle dog) which became an integral tool in cattle breeding. The dogs also helped to guard the herder's property and family. As previously stated, the breed standard was only internationally recognised in 1995 when it was published by the FCI.

The Saint Michael Cattle dog has a broad, square head and has very strong jaws and muscular trunk and limbs. They have a medium length neck and long legs. The animal reaches around 60cm in height, and usually weighs around 77lb. Their coat is short and harsh to the touch, perfect for a breed which traditionally lived outdoors. Their colouration is mottled browns, greys and tans with occasional white patches, usually on the chest. Traditionally their tails are docked and their ears are normally cut round. If uncut, they have drop ears.

The breed should have a strong head, showing parallel planes of the skull and muzzle. The skull should be broad and square with a definite stop. The muzzle needs to have straight top line and should be a little shorter than the skull.
White markings are permissible on the forehead and the region from chest to chin. Small white marks on either both of the front feet, both of the rear feet, or on all four feet are also permitted.
Skull and muzzle converging, and having a slightly under or overshot mouth are severe faults. Excessive shyness or aggression are faults which will eliminate the dog.