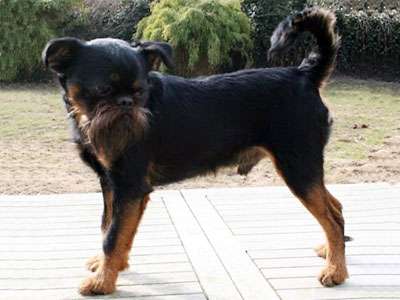 The Griffon Belge is one of a group of three toy subspecies which are loosely grouped together under the name of ‘Belgian Griffons’; the other two being Petit Brabancon and Griffon Bruxellois. To some kennel clubs and breeders, all three types of canine are considered to be the same breed, with only small variances in coat and colouration to separate them.

The dog is named for its country of origin, Belgium and the breed is descended from small, rough-coated terriers that were commonly to be found in Belgian stables, with the addition of a healthy dose of silky spaniel and snub-nosed pug along the way. The spaniel heritage can be seen today in the Griffon Belge and the Griffon Bruxellois’ beautiful rich red and tan colouration. Queen Marie Henriette of Belgium took a keen liking to the sturdy little dogs and helped to boost their popularity tremendously. The Second World War took its toll on the native population of the Griffon Belges, seeing numbers plummet to almost zero. The breed had spread to the UK, and thus was saved, although a number of unwanted traits (such as a tendency to webbed toes) had to be bred out of existing specimens. Numbers have never been high, and even today, when a fondness for smaller breeds abounds, they are considered a rare breed.

Griffon Belges are attractive small dogs – falling into the toy category – with pugnacious and characterful faces. They strongly resemble the teddy-bear-like Ewoks of Star Wars fame, and their looks account for their tenuous but steadily growing popularity. They often have a pronounced under bite, with the tips of their lower canines visible when at rest (although this is not a desirable trait), and they can grow remarkably long ‘beards’ and ‘moustaches’ too. Formerly, the animals used to have their ears cropped and tails docked, a practise that is frowned upon, if not outright illegal in most countries. Their natural tails are relatively short and range from slightly curved to positively curly. Their coats tend to be short and slightly rough (the Petit Brabancon has the shortest and silkiest coat of the three subspecies) and they come in a variety of colours, from black and tan, to the ‘traditional’ reddish-brown and black with a dark ‘mask’ over the eyes and head (known as ‘belge’) and ‘red’ which is similar to belge but with more red over the body and only the merest touches of black on the points.

These small dogs have wonderful personalities and display intelligence when stimulated. Their small hairy faces (which have been likened to monkeys!) show almost human expressions, which further adds to their charm. They are good family dogs, but are not endlessly patient and will defend themselves if teased or manhandled, so any children in the home must be taught proper dog-handling manners. Griffon Belges are active and will exercise themselves indoors, but, as with all breeds, do best with a lengthy and interesting daily walk. They should not be permitted to see themselves as the leader of the pack as the breed tends to arrogance when spoiled: coddling treatment and pampering should be strongly discouraged.

Treating the breed as a ‘small human’ or allowing them to break the rules because they are ‘small and cute’ can lead to behavioural issues, nervous tension and even biting behaviours. If properly trained and well socialised, these issues can be avoided. The breed does have a tendency to suffer from slipped stifle (a dislocation in the knee), as well as having some respiratory issues; probably a memento of their pug ancestry. Their large eyes, which are slightly prominent are also prone to easy injury too, another pug-like issue. Sometime skin irritation and allergies can be a problem for Griffon Belges, so owners should be advised to watch for excessive licking, especially of paws.