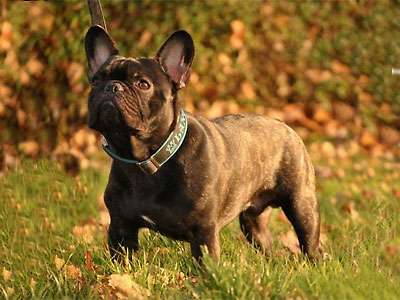 The French Bulldog was developed in Nottingham in the 19th century when a group of lace makers created a smaller lap version of the English Bulldog. This was originally referred to as a toy bulldog. The breed was taken to France during the Industrial Revolution in the 1860s, where it was extremely popular and renamed the French Bulldog.

This compact, sturdy and stocky small dog has a large square head with a rounded forehead. The broad and deep muzzle has a well defined stop, while this black nose is sometimes lighter in dogs that are of a lighter colour. The upper lips hang over the lower lips, while the lower jaw is deep and square. The dark eyes are set wide apart and are round and prominent. The breed has bat-like ears that stand erect and narrow as they reach the tips, while the tail is either straight or shaped like a corkscrew. The chest is deep and broad, while the front of the breed is slightly wider than the back. The fur is rather fine and is short and smooth, covering rather loose skin that forms wrinkles around the shoulders and head. The coat comes in a range of colours including brindle and white, fawn, white, black and various combinations of these colours.

This is a pleasant natured breed that it easy to take care of. The French Bulldog is alert and playful as well as very affectionate. Although the breed is enthusiastic and lively, it does not have the characteristic yap of many small dogs. The French Bulldog has a comical personality that can provide a lot of entertainment and because the breed takes to strangers and children well it makes a great family dog. Although some French Bulldogs slobber or drool, this is not always the case. The breed should not be left alone too long, otherwise it can become anxious and potentially develop Small Dog Syndrome.

Like many smaller dogs, the French Bulldog is susceptible to a number of health problems, including joint diseases, heart defects, spinal disorders and eye problems. Because pups have large heads, they often have to be delivered by caesarean section. The breed is known for respiratory problems and tends to snore and wheeze. If the French Bulldog gets to hot it can be prone to heatstroke. They should not be overfed as the breed gains weight easy, which can contribute to a swollen abdomen and breathing problems.

French Bulldogs adapt well to apartment life and are fairly active indoors, meaning that they do not need a garden to run around in. the breed suffers from temperature extremes, meaning that it should not sleep outside and should be kept warm in the winter.

The French Bulldog requires a long walk every day in order to satisfy their migration instinct. French Bulldogs that are forced to stay close to home all day tend to become slightly sullen and withdrawn. Although the French Bulldog enjoys a range of different types of activities, it does not swim and care should be taken around water. The breed tends to have high energy levels and will run and play for several hours if permitted. It needs very little grooming and regular brushing with a stiff bristled brush is usually enough.