Livestream Sponsors Shop
Hello
Register to use all functions.
Detail 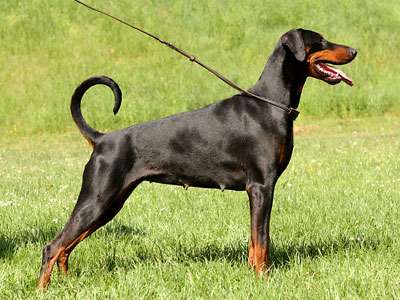 A relatively new addition in the canine family, the Dobermann Pinscher was brought to existence in Germany towards the end of the 19th century. The Dobermann was bred primarily for the purposes of guarding and protecting. In terms of lineage, the Dobermann is believed to be a highly varied mix with ancestors such as the Rottweiler, Terrier and German Pinscher. Given the breed’s extreme intelligence and energetic disposition, the Dobermann is most appropriate for law enforcement and military, dog sports, or as a family companion.

The adult male Dobermann is 26 to 28 inches tall and the female adult is about 24 to 26 inches tall. A Dobermann has a weight somewhere between 60-80 pounds. With a smooth and glossy coat, muscular build and royal colour variations of blue, red, fawn and black, the Dobermann Pinscher has a grand and majestic appearance. Surprisingly, for a breed known for sharp wits and agility, the Dobermann remains puppy-like for about 3 to 4 years.

The Dobermann has a distinctive clever personality. The Dobermann Pinscher loves to keep busy, both physically and cerebrally. Highly intelligent and remarkably active, the Dobermann is a natural protector. He has impeccable qualities of loyalty and one should not be surprised by his aggressive efforts to shield his family and loved ones. However, the Dobermann is only aggressive under perceived threat and does not threaten unprovoked. This breed is known for its love to keep busy, both physically and cerebrally. The Dobermann is quick to learn new things and is often assertive, but rarely stubborn or wilful when trained right.

A large, active dog that needs lots of exercise, the Dobermann is a good fit for a large house in the country side or the suburbs with a large space for him to run around. Given his territorial nature, a fence is a necessity to keep the Dobermann in, both his own safety and for the safety of the unwitting creatures that might wander into his turf. Even though this is a sweet, good-natured breed, people are known to be afraid and apprehensive of the Dobermann and it is advisable to keep him leashed in public. The need for the Dobermann to burn energy and get a lot of exercise can sometimes be demanding for owners and one must be ready to devote a good amount of time. The breed is sensitive to cold and needs sufficient shelter and warmth in winters.

The custom of tail-docking and ear-cropping is traditionally associated with this breed. Tail-docking is typically done during the puppy stage and often by the breeder. On the other hand, ear-cropping is something that the owner may choose to do later on. It is a surgical process taken care of by the vet and requires substantial expense and post-operative care. Both the procedures are discretionary and in some countries, these are now considered illegal.

The Dobermann is a complete family bloke and under no circumstances is it a good idea to leave him locked out or chained up for too long. He develops best when he is included in household activities. Being a pack animal, the Dobermann will try and take the role of the alpha in the house and it is necessary to maintain your position as the pack leader through steady training. Training the Dobermann is actually an easy task because he picks things up rather quickly. While this makes for an eager, easy-to-teach student, it also creates the challenge of keeping the training exercises new and stimulating to keep the dog interested.